I started this project like most of the others I have done, based on a need I had or have seen others have. Like many others I have always liked AR platform rifles and have several, so when Chassis bolt rifles started coming into their own I really liked them for certain applications. The explosion of PRS competition fueled the chassis rifle’s development like a shot of nitrous oxide. Chassis rifles have always had a good feel and function to me. I have a couple issues with the chassis system in general for hunting applications the biggest is weight. Now if you are building a heavy dedicated long range rifle that is not the issue it is for the carrying weight rifle. For the carrying weight rifle a chassis that weighs 4.0 lbs or more without barreled action bipod or optic is a nonstarter. It seemed that a new R & D project was in order, a light weight chassis hunting rifle.

Right away I laid out some specs and parameters. It must use a 700 Rem footprint and be usable for right and left handed action. It must be under 2.5 lbs, preferably 2.0 lbs. or less. It must use AI mags from Accurate Mag for OAL cartridge length. It must be able to be produced in kit form to be used by any good gunsmith. It must, above all else provide a solid platform for accuracy of the barreled action to be realized. With these key points in mind I went to the drawing board and started to work. The prototype rifle chassis was built around a right handed Remington 700 short action and was to be chambered in 7 WSM. I designed in an AR 15 modified grip from Ergo (most any grip can be modified to fit). I designed in a dual mag catch system to prevent an unwanted single sided accidental discharge of the magazine. 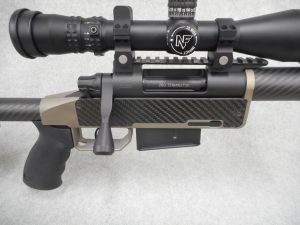 The main chassis body came together out of 7076 T6 aluminum in a two piece design that ties the recoil lug together with the main body to stiffen up the platform while needing only one action screw. Once this two piece “cage” for the action was together it was time to add the other essentials. Carbonfiber side plates were added to cover and further stiffen the cage. The side plates were fastened in a way that the chassis can be broken down removing only 3 screws from the cage while leaving the side plates on. This allowed for quick service or adjustments of the trigger group.

With the cage, dual mag releases and side plates all squared away I moved on to the controls. The AR 15 grip was modified and installed. A matching woven carbonfiber thick walled tube was added to the front for a hand guard. On this hand guard an end cap was needed to protect the edges of the Carbonfiber. A short picatinny rail was added to mount a bipod to. This rail also tied into the end cap that went inside of the tube. The rear stock assembly was based around a super thick woven carbonfiber tube. In kit form this allows the end user to cut to length and set the length of pull on the stock. The actual stock is made from a “bombproof” impact nylon for weight and durability. It fits over the tube and incorporates one of our Kydex cheekpiece to be adjusted to proper cheek height. With the chassis roughed in it was time to choose colors. Our standard color set is to be anodized grey like the lighter colors in the carbonfiber weave. The metal on the action and barrel will be Cerakoted Graphite Black. This made for a subtle but distinctive looking rifle. The stock portion was finished off with a one inch black Decelerator recoil pad.

The chassis itself comes in just under 2.0 lbs making it one of, if not the lightest hunting rifle chassis on the market. By design it will take a right or lefthanded action with any true Remington 700 footprint. We have already sourced a couple of titanium actions for ulttralight builds for customers. 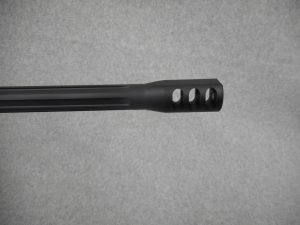 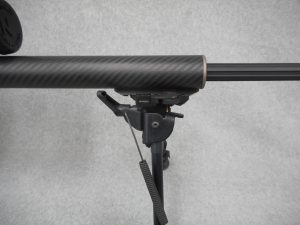 There are choices to further be made concerning weight. The Harris “S” series from Larue Tactical weighs in right at one pound vs. the Spartan products Javelin at four ounces. The harris is much more stable but weighs more. The same considerations come with glass, the Nightforce 2.5-10 weighs 22 ounces and the weights go up from there. There are lighter weight target turret and ballistic reticule scopes available but the performance is not worth the weight loss to me. Muzzle brake or suppressor. The brake is lighter but the suppressor is so nice to hunt with. At the end of the day I added some weight for extended capability. The weight was worth the performance for me. The rifle chassis we named the MPH (Mountain Precision Hunter), a Remington 700 action, a Hart # 3 26” barrel, muzzle brake, Nightforce 2.5-10 NXS weighs in at 8.6 pounds ready to roll and shoots under ½ moa all day long.

Before I was even done with the MPH project I was already looking for a better way to build the mouse trap. After playing with some numbers in Quickload I started to envision a short barreled 7 WSM+P. I ordered a #4, 1-8 twist, fluted, 18 inch, .284 barrel from Hart. I had a Thunderbeast Ultra 7 titanium suppressor and brake adapter on hand. So I started the process of building and tuning what I had hoped to be the ultimate chassis hunting rifle.

Now at 9.8 pounds complete this was not to be the lightest rifle in the woods, nor was it to be to be most powerful. For most duties I carry the bipod in my backpack and not on the rifle to reduce the carting weight down to 8.7 lbs. For my use however it is the perfect balance of weight, sound suppression, and long range ability that I could use on really long or rugged hunts.

The only unknown left to tackle was cartridge performance. I had never run a 7 WSM+P out of a short barrel let alone one only 18 inches long. QL predictions indicated that RL26 would be a top performer along with VV N560. I had a pretty good pile of 26 so I choose to start there.

I was quite surprised at the high velocity numbers from this barrel. They were 100 fps faster than I expected, but based on this info I decided to work with 67.5 gr. RL26 first. Traditionally I tune my loads by seating depth after establishing a good operating pressure. I start at -.000” and seat the bullet deeper form there. 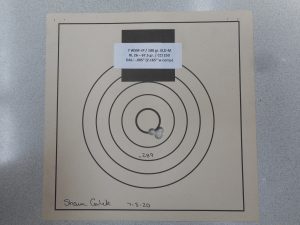 So in this case load development went quickly, I now have a suppressed rifle that is slightly shorter than a 26 inch barreled rifle, it weights under 10 lbs complete ready for the field, has exceptional ballistic performance, a detachable magazine, moderate to light recoil, ergonomics I really like and is everything I could ask for in a lighter weight rifle.