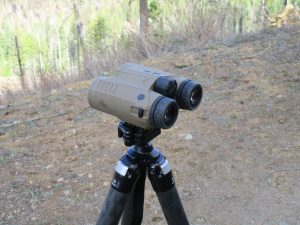 The extreme range shooting world has been pushing the bounds of long range shooting technology from the beginning. 1000 yard shooting was once marveled at and considered by most voodoo. Now 1000 yard shooting and well beyond is common place and generally accepted as something most people can accomplish if they want to learn it. In the last 30+ years of long range shooting, competition and hunting I have seen the seesaw effect of not enough rifle vs. not enough supporting technology continually go back and forth. In recent years with the increased interest in Extreme Long Range (ELR) competition the rifle / cartridge development has come to a point that other technology has had to catch up to their abilities. Nowhere has this been more noticeable than with the ability to range targets accurately. Yes, there has been the occasional Russian class 2 LRF floating around and a handful of PLRF 25’s for those that could afford them, but I am talking about readily accessible range finders that will range 3000-4000 yards consistently.

I have owned 20+ different range finders in the last 30 years, everything from reflex style to the latest military grade laser units. I was on the fence about throwing down a wheelbarrow full of cash for a PLRF 25 that I had the opportunity to use in a couple of our military classes when I heard some rumblings about SIG developing a 10K LRF binocular with ballistic capabilities. I patiently held my breath and my cash waiting for this to become reality.

While waiting for the SIG 10K to become available I used my PLRF 10 and Leica 3500 range finders. These two units had about the same ranging capability, in normal conditions on normal targets 2500-3000 yards reliably. I am not concerned with the max range on a “reflective target” or anything else I am only worried about what they will do in the real world. Needless to say this kind of performance while good, makes pushing past 3000 yards pretty difficult. I have always believed that whatever distance you want your LRF to work at in the real world you should get double that in terms of maximum advertised distance. 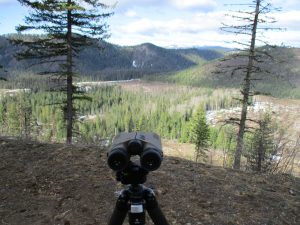 I was pleasantly surprised when the SIG 10K showed up on my door step. I tend to be pretty critical of new gear until it proves itself to me. So my first thought as I unboxed the unit was, “This is pretty heavy.” However after weighing the SIG, then my binoculars, range finder and Kestrel 5700 I found that the SIG was several ounces lighter than the combined weight of the other items. I had hoped that the SIG would come with a ¼-20 adaptable way to mount it to a tripod but it did not. Sportsman’s cured this with their binocular adapter and stud. I ordered the stud for the standard Swarovski bino’s and the low adapter. Of course I had to get a battery into it and see how the range finder fared at big distance, as this was the most important feature to me. Simply resting over the hood of my pickup I was able to easily range brush and trees at 3500-3600 yards in the bright sunlight, with the sun shining on the target. This is easily 1000 yards further than my other range finders in the same conditions and I didn’t even have it on a tripod yet! While more testing was in order I was satisfied that the range finder portion was going to be pretty good. My next move was to dive into the ballistic calculation portion of the device. Following the instructions I paired the 10K with my phone and the downloaded BDX app. In the past Bluetooth connected devices for shooting and in particular the earlier SIG units have shown some connectivity issues and the occasional problem where they kind of did whatever they wanted. I’m happy to report that paring, transfer of data and application of the LRF, were all quite easy and accurate.

Using the BDX ballistic program is quite easy, there are not a lot of extra boxes to fill and you don’t need a PHD to operate it. To check the accuracy of the BDX, I entered the same conditions into the BDX, AB and Hornady 4DOF app. out to 2000 yards they were all reasonable close to each other. Satisfied with this I entered my 338 Terminator info into the app and transferred it to the 10K, this was quick and painless. I prevalidated the program by ranging targets with the 10K then comparing the results to my Kestrel / ballistic app results. There was a small validation correction needed for the BDX compared to the other programs. I ended up running a velocity 20 fps slower to make them all read the same out to 2500 yards. I started exploring the 10K’s options and features, my favorites were the ability to zero the laser to the internal reticule if you discover at huge distance it is not perfectly aligned. The target plotting feature on Base maps was my next interesting feature.  The base maps app will have to be purchased for this and as I already had Base maps and OnX both so this was no big deal. The “remote marker” feature is a little deceiving, you get the impression that the 10K will simply put a marker in the Base maps app when you laze the target. This is of course not quite how it works, you open up the Base maps app and go to the remote marker feature in “tools”. In this you enter the range from the 10K, then Base maps switches to a crosshair targeting screen that you shoot the target with. When you do this it plots a pin to the target. This feature is especially helpful in marking a downed animal late in the evening when you know recovery is going to be an after dark operation. Before trying to use this feature, be sure you have calibrated the compass in both the BDX app and the Base maps app. If you fail to calibrate these it will result in your remote marker not being in the correct location and that could cause you untold amounts of trouble in the dark. Using this feature of Base maps in conjunction with the 10K can allow you to plot a safe after dark route in sketchy terrain and I really like this ability. 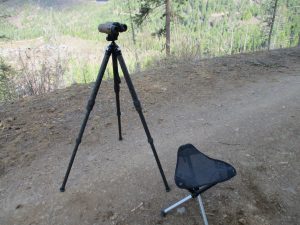 Final testing or actual application had to wait for the Sportsman’s items to arrive for tripod mounting. When I was able to use a tripod mount with the 10K the results were indeed impressive. The 10K ranged targets as advertised. I was able to range trees, grass & brush out to 3600-3700 yards without much trouble. Good solid rock faces without the sun shining on them were ranged at 4640 and 4822 yards. Reflective targets I did not test or care about, I am really only worried about what happens in the field. The fact that the 10K is supposed to range a reflective target at 10K is simple a performance standard and bragging number. All things considered I am quite happy with the performance of this unit, Some people have complained about optical quality saying that the color transmission has a slight blue tint to it. I did not see this and honestly would have cared if it did. One must consider what we are looking at here, this unit is first and foremost a long range LRF. Next it is a ballistic calculator with environmental sensors. Last but not least it is a pair of binoculars. When you consider all of the things the 10K does and has for $2000, I don’t see how you can fault it. I am not one to search until I find something to complain about but I did run across one small issue. If you bring you 10K from a stable warm environment (like your truck) out into a colder or hotter environment they take a long time to adjust. Taking my 10K from 67 degrees inside the truck to 35 degrees outside shooting temp took almost 20 minutes for the 10K sensor to come down to temperature. Again this is a minor gripe as the engineers were smart enough to put the device temperature on a screen and made a manual adjustment so you can change it.

While I only have a day of testing in with the 10K I believe it is going be my go to piece of gear for long range shooting and certainly for long range hunting.