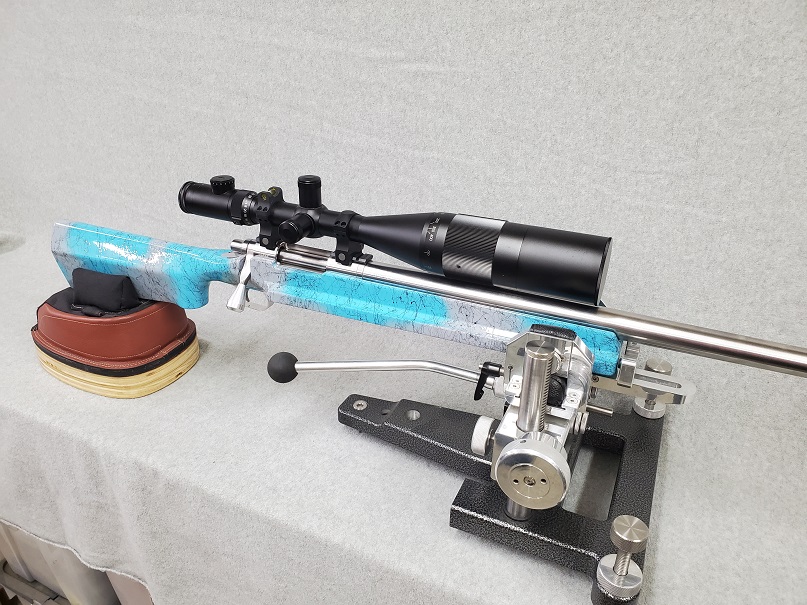 While we have been involved in the pursuit of accuracy for 30 years and have built benchrest style rifles in the past just recently I have found myself interested in actual benchrest competition. I built my first benchrest rifle in 2002 on a Remington 700 action chambered in 6 BR.

I knew nothing of the equipment available to make “bench” life much nicer. Still it was a good experience and I learned quite a lot about benchrest accuracy and more importantly that your ability to read a wind flag was at least as important as your setup and load if not more. Now fast forward to today where I am now developing a renewed interest in benchrest shooting, this all started with 50 yard .22 rimfire score matches a couple of years ago. Now however I am quite focused on the 100, 200, 600 & 1000 yard benchrest pursuits. What is a guy to do with a new interest like this you ask? Well of course you build new rifle!

I started to gather parts to build a new benchrest rifle with what I have learned since that first effort. I wanted to build a platform that would allow me to compete in a class at all distances with maybe only a barrel change. I decided to build a rifle utilizing one of our solid bottom Terminator benchrest actions. This action has a Remington 700 SA footprint and like most custom actions accepts most Remington 700 parts like triggers. I got a Jewell 2 oz. no safety BR trigger for the project. I have for years liked the McMillan “Edge” BR stock and was excited to get one colored just like the loudly colored version on the website. Thinking that this stock would cross over the various distance disciplines well I ordered one. Next on the list was barrels, I needed at least 2 and maybe 3 barrels to work the different distances. I settled on 3 barrels all from Hart. First was a 100/200 yard barrel a 1-14 twist chambered in 6 BR I had planned to use this one in local matched and HV class IBS competition. The second barrel was another 6 BR but with a 1-8 twist to run 105-115 class bullets for 600 and possibly 1000 yard competition and still in HV class. The last barrel was more of a test barrel chambered in 260 Terminator with a 1-8 twist specifically aimed at 1000 yard competition especially if I anticipated rough wind conditions. Last was glass to top the build off with, I choose a Nightforce 12-42x BR model mounted in Defensive Edge rings, with an anti-cant level.

The first version to come together was the 260 Terminator as I had a barrel in the shop perfect for the build. I chambered up the barrel, bedded the action in the stock and discovered the first problem. The impregnated color scheme of the stock was not what I had envisioned and no matter how much I tried to like it, I did not. As a matter of fact the more I looked at it the more I disliked it, so I handed it off to my dad the paint shop master to apply a bright teal /grey with black web paint job on it. This color scheme I really like and it makes me feel warm and fuzzy when I look at it.

The 260 Terminator barreled version of the rifle wears a 30” Hart barrel and weighs more than the heavy varmint class weight but was still legal for “light class” 1000 yard benchrest so I was pleased with that. I started load development and testing at 100 yards using my go to Berger 140 gr. Hybrid Target bullets. While the rifle shot well at 100 yards it was not stellar in my opinion so I looked at trying a new powder bullet combo. It turned out that this barrel really liked H4350 and the Hornady A Tip 153 gr bullet combo. This load started knocking down groups in the 1’s and low 2’s with regularity and a velocity of 2980 fps / ES 11 fps. I was quite happy with this and had not even considered a different barrel or caliber. The issue with the 260 Terminators was that the recoil required me to have to hang on to the rifle to shoot it. Free recoil was not going to happen. Holding the rifle is not the worst issue to have but I was interested to see if the fast twist 6 BR / 105gr combo would “run with it” at distance when the conditions were not the greatest. While I was interested in the 600 / 1000 yard shooting and competitions I was keen interested in the closer 100/200 yard setup and pursuit of ridiculous accuracy.

It was not too long before the 1-14 and 1-8 twist .243” barrel blanks arrived from Hart, love those guys so good to work with. I had in preparation designed a 6 BR reamer print for the Lapua brass I had on hand for the project and had JGS build us one. This reamer was designed for the 65-68 gr. class bullets with the ability to throat for the 105-115 class bullets. I spun up the Hart barrel chambered in 6 BR and installed one of our Terminator Tuners on it. This is something I had wanted to work with to see how well it worked out. There has been a lot written / discussed about keeping your BR rifle “in tune” during a competition. Most people do this with load modification during the match. I had hoped that if I could do my best load development with the tuner set at the middle of the adjustment then I could adjust the tuner to compensate for changing match conditions instead of changing the load.

Initial 100 yard work with the 6 BR was interesting. I had started off with H380 for a couple of reasons, first the numbers seemed like they would fill the bill nicely and second I had some. I have included all loading data and notes at the end of this article. The long and short of the H380 was that it did in fact shoot well, however it was super sensitive to everything and seemed like keeping it shooting well in a variety of conditions would be nearly impossible. 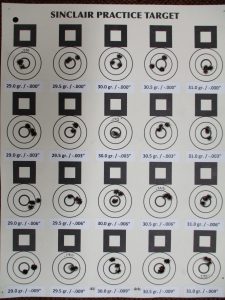 The next powder to try with the 68 gr Berger bullets was Varget. Varget is of course super stable and the powder of choice for the heavier bullets like the 105-155 class bullets I had intended to shoot in the fast twist barrel. Again I have included the load data at the end of the article the Varget shot well and seemed to be easy to work with. It was quite clear that it was capable of shooting in the 1’s if I did my part.I really wanted a barrel / load that would shoot the occasional “0” and cruise around in the 1’s though (who doesn’t right?) so I wanted to try one more powder. I selected Alliant 10x and was lucky enough to locate and purchase a 5 lb. jug of it. I loaded a complete test spread working with 29-31 grains crossed with OAL range of .000” to -.009” off of the “jam length”. The results are in the picture below.As you can see there were a couple of groups in the high 1’s and given the conditions at my home range I considered this to be pretty good. 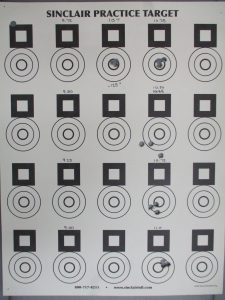 Now it was time to see if the tuner could improve on this performance. I took my best effort 29.5 gr. / -.010” of jam and test tuner settings. I decided to start at 10 revolutions out and shoot groups at .25 rev intervals.

I could not have been more surprised with the results. The best results shaved off .050” or so off the group size, this is not what surprised me. The sensitivity of the high powered round compared to my experience with the .22 rimfire rifles was staggering. To go from one accuracy node to the next with a .22 RF took roughly 3 full turns of the tuner. As you can see in the test target this took only one full turn to accomplish with the 6 BR. The other thing was how poorly it shot at its worst settings. With this accomplished I needed to shoot some practice “matches” and see if the tuner would adjust for conditions like I wanted. I was waiting for my VLD bullets in 6mm to arrive to start this process with the fast twist barrel. Ultimately in looking back at my testing data I am not sure the light bullet 10x load is forgiving enough for my taste. 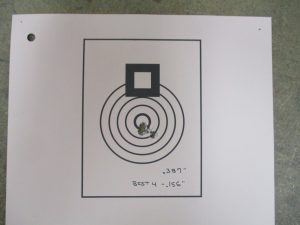 I fired my first official practice target today with what I feel are my best load and tuner settings. The wind affected me in elevation within the group, I feel like my inability to correctly read the wind was worth ½ of the groups vertical spread including one poor shot out of the group. The first 4 rounds went into a nice vertically spread cluster of .156” the wind switched I waited, then it died completely, I held for center but should have kept my previous hold. The 5th shot opened the group up to .378”. Still I feel really solid about the rifles setup and tune. 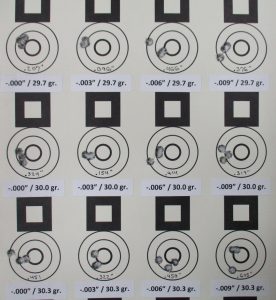 My VLD bullets finally showed up today and I can fire up the fast twist barrel. I started the process similar to my other tests except there is a mountain of data using Varget and VLD bullets in 6 BR. Clearly most people were running 30 grains or so with great results. I made a work up target running powder charges of 29.7, 30.0 & 30.3 grains of Varget coupled with lengths of -.000”, -.003” -.006” and -.009” off the jam length. As you can see -.003” off the jam length is the sweet spot for accuracy. After shooting this run I went back and shot a group at -.003” and 29.4 gr of Varget. That group was .138”, so I now had a window of close to 1 grain that would shoot in the mid 1’s and at its best was clearly capable of “0” groups. This is a lot more what I had in mind when I started this project. Not being one to blindly follow “what everyone else is doing” I am keenly interested in running the VLD bullet / Varget combo at 100/200 yards. When you compare the 105 gr. bullets to a 65 gr FB target bullet there is a substantial windage advantage even at 100 yards. The up side to this working out is that I might be able to run this set up for every distance out to 1000 yards. Very excited to see how this pans out. The only real testing left to do is to see how the tuner is able to keep the rifle in tune with changing conditions. Tuner Testing will be its own blog article after we have a chance to test in a variety of conditions.

Load Data: Use Caution with Load Data – apply smart loading practices and consider the variables involved. Use this data at your own risk. 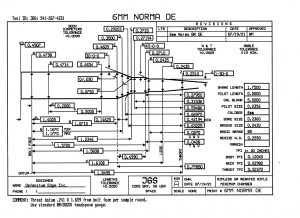 I am barreling up the 6BR barrel for my benchrest rifle today, 24” finished length + the Terminator tuner.

Loaded for 5 round test groups at:

Load Data: Use Caution with Load Data – apply smart loading practices and consider the variables involved. Use this data at your own risk.