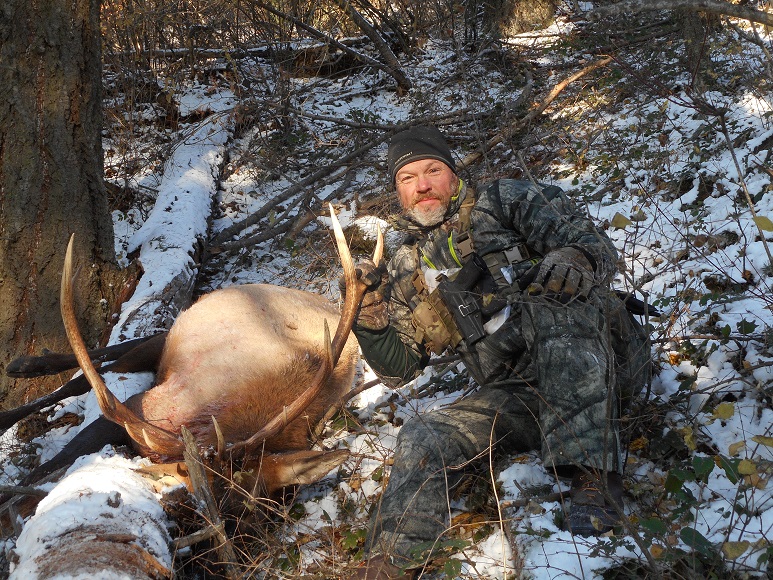 So this elk season was on track to be the worst ever, I actually thought it might end up being the first time in the last 14 years I didn’t bring home an elk. From the start of archery here in Idaho I have been covered up with hunters (an overwhelming number of out of state hunters), dwindling elk numbers and wolves in every major drainage. I was starting to think the handful of smaller bulls I let walk during archery season was going to be a mistake. So on the last day of panhandle “A” tag rifle season, the weather forecast was for cold and windy 11 degrees and 15-18 mph winds from the N-NE. Given these conditions, it would have been easy to stay home in a nice warm bed and think about the deer season. However, I started thinking about a spot I sometimes hunt that is south facing and when the weather is cold and a little snow is on the ground I have seen single and small bachelor groups of bulls in there. So I told myself that everyone wants to be an elk hunter until it is time to do what solid consistent elk hunters do.

I left the house early drove to my drop off spot where it was 6 degrees. I unloaded my E-Bike and put my pack on. To say that the single-digit temps and 10+ mph wind was cold is a serious understatement. I parked my bike as close as I dared go and hiked the rest of the way in. I set up in the dark with my LRKM in 338 Terminator, range finder and Kestrel 5700. I brought a small lightweight stool and was glad I did. I used my “pump pillow” rear bag to put my feet on to further insulate them from the ground and waited for it to get light.

Normally I don’t mind and even prefer being on-site early, but by the time it was light enough to glass I was just about frozen. After 20 minutes of glassing and getting colder I spotted a cow and calf elk just over 600 yards from my position. I glassed close to see if I could locate any more but there were none to be seen. I watched the bedded cow chewing her cud and waiting for the sun to break over far enough to shine on her for a while and then spotted another elk far to their left. I could see that it was a bull with the naked eye but got the binos on him anyway. Confirming it was a small branch antlered bull (5×5) I ranged it at 843 yards, pulled some dope for the 338 Terminator and dialed it in. I looked at the wind but since we were on the south side of a ridge and a north wind (the elk didn’t care for it either) there was none. It is funny to hear the wind howling over your shoulder on one side and shoot “0” wind. I have come to like the LRKM so much simply because that a shot of 843 yards in a good wind just isn’t much of a challenge. I got in behind it and waited for the bull to turn. He fed for a minute or so (seemed like longer since I was lying on a patch of ice) then turned broadside. I held high shoulder and broke the trigger. I recovered in time to see the impact within an inch or so of my aiming point and the frost fly off the fur. On impact, he hit the turf and slid down the steep hillside. The rest of the day was typical post elk shot activities, only colder.

I managed to get back to the truck with the boned out meat and antlers by early afternoon, the warmest part of the day and it was still only 16 degrees. The second I took my baklava off I was rewarded with an almost instant ice cream headache from the 12-15 mph wind. Slipping it back on I got the elk, my gear and myself loaded up and headed home.