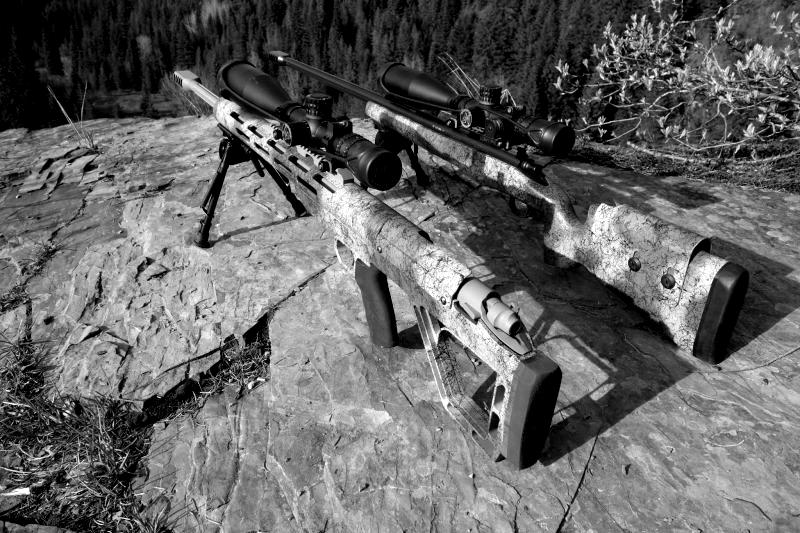 I developed and named the 338 Edge in 2001. Now I am sure I was not the first person to neck up the 300 Ultra (RUM) case to .338”. I have in all probability spent considerably more time with the round than anyone else. Jacob Gottfredson wrote an article about my test rifle that published in the October 2002 issue of “The Accurate Rifle”, this article can still be viewed in the “snipers paradise” website. Since initial development we have been refining the 338 Edge to become the most practical “bang for the buck” available to the long range hunter/shooter/tactician.
Our first refinement was to move to 30” match barrel of extreme quality. We chose Hart barrels based on reputation and our experience with them and have never looked back. We currently use others as well but the Hart tubes are the overwhelming majority.
With the longer barrels we started running heavier bullets specifically the Sierra 300 gr. SMK. We can run the 300 SMK 2800-2950 fps depending on the load and individual rifle. What has become our standard load runs right at 2800-2830 fps. While you can run faster this load combo gave extreme velocity spreads of low teens and single digits. Also since we were using a Hodgdon “extreme” powder when we tested temperature sensitivity we found it vary less than 30 fps from 20-90 degrees. No other combo we tested came close to this kind of consistency. From my position I will gladly give up 100 fps (or less) for this kind of performance.
Our next refinement was to come up with more robust platforms for military applications. We built and tested based on a Remington 700, Sako extractor w/ dual ejectors, a Sako styled bolt release, a Mauser styled bolt release and blade ejector, a controlled round feed, an M16 extractor and a few others. For extreme use applications the Mauser styled bolt release/blade ejector and the M16 extractor made for the most robust combo.
We developed and launched a line of muzzle brakes based on testing of multiple designs that took us over 2 years R&D time. You can from a good position watch your bullet strike at almost any distance past 500-600 yards with your rifle scope. This makes spotting your own shot possible.
We have built over 280 338 Edge’s in different configurations at this point, 700 repeaters, 700 detachable box setups, 700 solid bottom single shots, 700 light weights, and customs actions BAT, Lawton, Nesika, etc. Most have been in similar configurations for long range hunting. Most wear the Leupold MK4 or Nightforce NXS optics and weighed in around 14-15.5 lbs. Our main focus lately has been to develop a shorter lighter long range hunting version of the “Edge” and we hope to have completed this project and be testing by fall of 2008.
Load Data: Note these are max loads in our rifles, start 10% lower and work up watching for pressure signs. Remember stupid hurts!
300 SMK
OAL 3.795″
CCI 250
H1000 – 90.0 gr
Velocity – 30 Hart Barrel 2810 fps
Brass – Remington
This is the standard load we test all rifles with.
338 Edge Custom Rilfe
Share: