If you have been following our pursuit of precision .22 rimfire accuracy you no doubt have seen some of the test rifles and projects that have come from it in the last year. The Wasp rifle a bright yellow Remington 581 based benchrest rifle.

We also did a lot of work with the newer CZ 457 Varmint as a stock class benchrest rifle.

Then along came our first prototype .22 RF single shot, Remington 700 SA footprint competition action on Big Red. This rifle was originally topped with a Weaver T36x while waiting on delivery of a Nightforce Competition BR scope in 8-32x. After just a short period of time shooting the Weaver T36 I kind of got to where I liked the whole setup and sort of put wanting the NF on it.

Everything was fine with my setup and platform at first. Then of course you start to learn a little more about the task at hand and notice little issues that become big issues when you are trying to run a 50 yard target at 250 and a high X count. The first issue that reared its ugly head was my front rest and rear bag connection. It became clear at my windy home shooting range that the ability to more quickly from the sighter targets and back to the score target was a big deal. Also an issue here was twitchy winds and making quick small adjustments to my hold point. I had 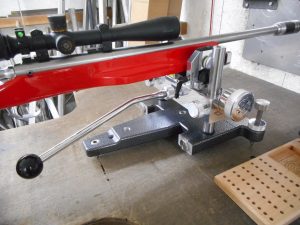 recalled that a friend of mine Ernie Bishop sold some high end front rests that I did not pay attention to much at the time. Ernie Bishop (307) 257-7431 ernieemily@yahoo.com I called Ernie up to get the scoop on a new front rest. Ernie was quick to steer me in the right direction and get me on the waiting list for a Neo joy stick front rest. When this thing eventually showed up I was a little taken back by it. Being a machinist / engineer for a long time in the gun industry I look this baby over and what a work of art it was. Everything was perfectly machined and super smooth to operate. The adjustable bag ears allowed for it to be used on multiple rifles without mounting a different bag on it. It had a level built in and was infinitely adjustable for level. There is a speed wheel for gross elevation adjustments and the rest itself could be configured several different ways to accommodate the end user’s needs. The speed wheel is nice but the joystick adjustment is so big you can drive all around a BR 50 target using just the joystick. The joystick has friction adjustment to set the amount of stick resistance like you prefer. This thing is defiantly a top shelf rest. Simply switching to this front rest made a huge difference in two ways. It allows quick and solid movement from sighter to score targets and allows you to sink the rifles stock in to the rear bag and not touch it after that. This front rest allowed me to shoot consistent 248-250 with a 6-12x count even in the crappy wind conditions I have here at home. I cannot recommend this rest enough if you are serious about the sport.

The next thing to come along in the way of improvements was better wind flags for better wind reading. I bought a couple of Graham Wind flags (www.BRflags.com) these were really nice and worthy of their reputation. After using the Graham flag for a couple of months I did notice a couple of small things. These are not issues 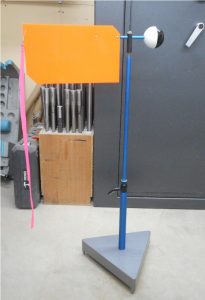 as much as they were a couple of small areas for improvement. The first thing I noticed was that in the right wind condition the flag vain could point one direction and the ribbon could point another. This came from two issues the original flag stand was nearly impossible to get into the ground level causing the pivot head to drag a little on one side. The other issue was the pivot head itself while well designed did show a little drag and allowing the flag to point one direction and the ribbon to change direction without moving the flag. This was in a very specific wind and not an issue most of the time. However as I soon came to realize everything is a big deal in .22 rimfire precision shooting especially score BR shooting. I decided to figure out a way to fix these issues and as always it turned into more of a project than I expected. The first thing was to develop a 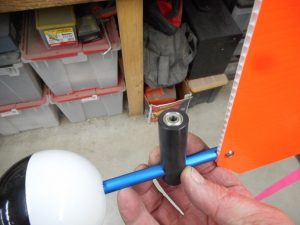 stand that was easy to setup and adjust for level to minimize the angle induce drag on the pivot head. We accomplished this with an inexpensivecamera tripod ball head in a two piece pole and attached it to a base we made that was filled with concrete for weight. The base weighs 20 pounds has 3 point contact with the ground and simply stays where you set it. It is heavy enough that the strongest winds do not wobble it. The next step was to reduce the pivot head friction as much as possible. We did this by building a new head out of nylon and installing a bearing in the bottom. In the top of the head we put an allen set screw with a hardened ball to ride on the pivot stem smoothly. To top the pivot head off we mounted a precision bubble level on it to allow for easy of leveling the pole. With the parts fabricated all that was left was to get a finish on it and make it look nice. Pro level tools should look like pro level tools. The steel base filled with concrete was coated with “hammer finish”, the pole pieces were anodized blue as was the ball to vain rod. With the flag completed the combination of leveling and friction reduction has completely eliminated the flags ability to show a direction that is different than the ribbon. This makes noticing direction changes much easier so that you don’t have a subtle change in direction sneak up on you. Making these changes has upped my best practice score at 50 yards to a 250 / 12x but more importantly it has made my average scores much more consistent. Stay tuned for more updates and improvements.