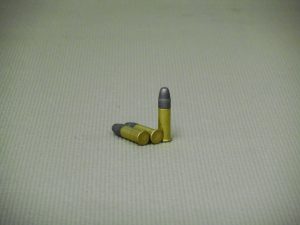 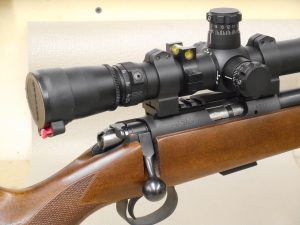 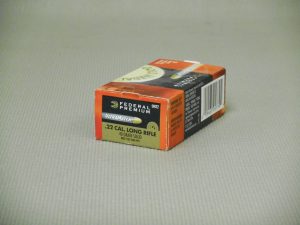 In the last 10 years and especially the last 5 years, long range shooting and hunting have really taken off in the sporting and hunting communities. You simply cannot open a gun magazine, gun or hunting website or watch a hunting show on TV without some coverage on long range hunting and shooting. Like any shooting sport or discipline to be good requires some practice. Large volume practice with high performance long range cartridges and good barrel life just don’t go hand in hand very well. The other major issue for most people is a place to practice field shots at longer distances. Most have access to a static distance range but some don’t even have that. I have been training long range shooters for over 20 years as a SWAT sniper and as an instructor for military and civilian shooters. About 8 years ago we discovered what came to be one of our best long range training tools the .22 rimfire.

We initially sought out an accurate .22 RF to use for class competitions and some initial training in our long range classes. After using and developing the long range setup for these .22’s , we discovered a ton of additional training uses for these little rifles. They have almost no noise compared to a muzzle braked large caliber rifle (we run ours suppressed so there is even less than that), zero recoil, no muzzle blast, easy to shoot and almost impossible to overheat a barrel. So, I’ll take you down the path of what we did, how we did it and how we train with them.

After some searching around and test firing several “accurate” .22 RF’s we easily chose the CZ 452/455 rifle series. I bought 4 of the CZ 452 heavy barreled varmint rifles with some extra 5 round magazines.We installed Timney triggers in them and set them up at 2.5 lbs. The barrels were shortened to 16.5” (a standard .22 RF has done all it is going to do in 16” anyway) and installed suppressors on them. The CZ is not a micro sized .22 the stock is full dimension and made for adults. As such it comes with a 20” barrel, cutting to 16.5” and installing the can only added 2.5” to the rifles overall length. Next Harris “S” series bipods with a Pod-Loc were added. We went to DIP Inc to get 20 moa bases for these and to Warne for vertical split rings. MSP supplied the anticant scope tube mount levels. Now all that was left to do was to pick out glass. 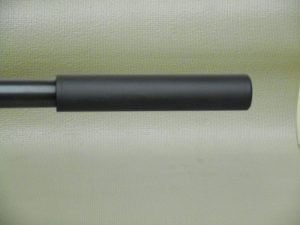 Picking out glass for this project was a whole issue all in itself. I wanted “scaled” glass by this I mean, if your scaling distance you need to roughly scale everything to match. So, no 20x or 32x scopes here for 100-300 yard shooting we needed to run 10x or less. My initial assumption was that 200 yard shooting with the .22 should closely replicate 1000 yard shooting with the big guns. With this in mind a scope of 4-5x would have been just right for scale, however there simply were not any scopes of that power range with the features we required for this endeavor. We needed adjustable PA, solid repeatable target turrets and some kind of graduated reticule. In addition we need the scope to not be a monstrosity on the rifle. After looking and debating several issues we settled on the Leupold MK4 3.5-10x40mm M1, TMR.This scope had all the features we required and was a solid unit. Now I know there are some people (maybe a lot of people) that think spending that kind of money on a .22 scope is a little nutty and I was too since I had to get 4 of them. That, of course all change when we started using them.

With the scopes mounted and the platform ready to go we went in search of the correct ammunition. Having been involved in a couple .22 accuracy project in the past I knew that finding the correct load was key to our success here. Long story short I tested 17 different kinds of .22 ammo, for group size, extreme velocity spread and muzzle velocity. After an exhaustive testing secession with all 4 rifles it became obvious that there were 3 contenders for serious long range ammo. Eley Tenex, Lapua Center X and Federal Gold Medal Ultra Match were the only 3 rounds that would get extreme spreads acceptable for long range work, had standard muzzle velocities and accuracy ½ moa or better. 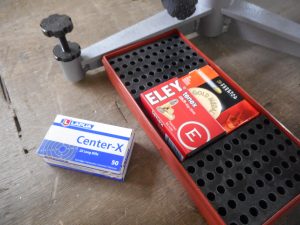 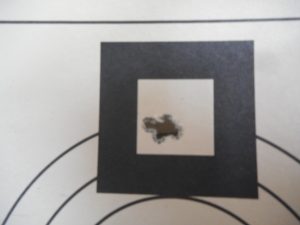 This is a tall order for .22 ammo and as it seems with most other things really good stuff is not the cheapest stuff. We did try some high performance (in terms of velocity) .22 ammo that showed good accuracy and ES but long range accuracy suffered a great deal. I suspect that the low BC .22 bullet transitioning from supersonic to subsonic was the reason. Standard velocity ammo starting out of the muzzle at under 1100 fps seemed to hold its accuracy over the long haul way better.

Now at this point in this little adventure we have a platform and ammo that looks like it will get the job done. The next step was to create a ballistic profile for these setups. It is not like there is a bunch of BC and long range .22 data around so we were going to have to develop it ourselves. To do this we need to run some optics tests. We box tested the systems to check for tracking and click values. We also checked the reticule sustentions for accurate measurements for our reticule holding students. We set the zero at 50 yards and chronographed the Federal Gold Medal Match (FGMM) at 1095 fps.

With our baseline 50 yard zero and a chronographed velocity we shot at 100, 150, 200, 250 & 300 yards. We noted the drops at these distances along with the atmospheric conditions to develop a ballistic curve using a G1 BC. I put in a call to Brian Litz of Applied Ballistics and Berger bullet fame to see if he had any info on our .22 bullets. As one might have expected Brian had a velocity and G1 BC that he said would do the trick. (G1 .144 @ a speed of 1140 fps) I dove into the Applied Ballistics program to see what I could do with the numbers out to 200 yards the ballistic curve was a dead ringer match for our drops. I made another trip to the range to check the 200-300 yard drops as there was some small variance from the program to our actual drops but I wanted to make sure this as not due to a slight but undetected wind condition. 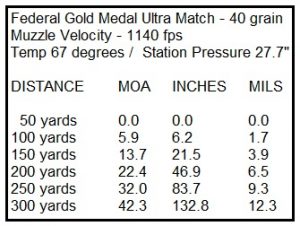 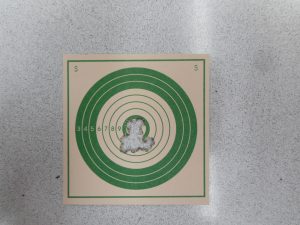 Now I could tell just looking at the numbers that if the wind was present at all that making a solid wind call would be no joke. If the wind is gusting from 3-5 mph and changing directions frequently, I hope you have your big boy pants on because it will be a challenge. Let’s take a quick look at a 278 yard shot, no incline angle on the shot. We do however have a 4 mph wind (not a big deal normally) from 09:00. If you don’t consider all the points of extreme range shooting here it would be a mistake. If you simply function up elevation and a standard 4 mph wind you get a drop of 110.5 inches and a Windage correction of 11.2 inches. Now let’s add the factor normally associated with extreme range shooting, additional drop from Coriolis Effect and Aerodynamic Jump is an additional 1.1 inches. Windage is the real bummer, right hand Spin Drift for where I shoot and Coriolis Drift add another 3.25” of Windage to the equation. So even at these distances we would consider easy with a big rifle, will slap you around with the .22 RF. Hitting a target that is 1” for every 100 yards of shooting distance is quite challenging even in good conditions.

Now we had a good solid ballistic curve to work with and it was already validated since we reverse engineered a curve from our actual drops. The last things we needed to do were to develop correct targets and a curriculum for training. Working with .22’s is nice we were able to build targets from 3/16” steel given the distances we would be shooting them. We chose animal silhouettes of a howling wolf, non-typical mule deer, whitetail deer, elk, and a bear. In the targets we cut kill zone circles out of them about 1.25-1.50 moa in diameter. We used the drop out pieces to make reactive “flash” targets. When the vital circle is hit it pivots, flashes an orange card above the animals back and spring loads itself back into position. All hits were audible and kill zone hits are visible. This made calling hits pretty easy out to even 300 yards and added an element of long range hunting training to the program. When the wind is reasonable I have had students only drop 1 or 2 vitals zone hits out into the body all the way out to 300 yards. If the wind is even a little bit squirrelly it is easy enough to completely miss the 10”x18” bear target all together. This was turning out to be good stuff. 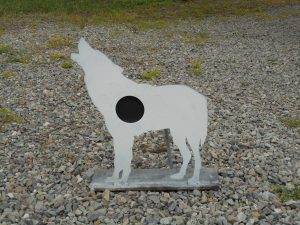 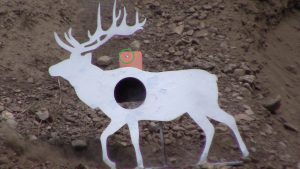 The list of all the things you can use this setup to train for is endless. We teach how improper PA adjustment can open a ¼” rifle up to a 2” rifle. Canting the rifle can make 2.0 moa of windage and .50 moa of elevation difference quite easily. We show how to run a box test, a variable power test and a click value test. Students can start shooter / spotter dialog while it is easy to hear and talk. High angle shots now only require 200 yards or so to do. Shooting from odd positions training allows the shooter to really work on how to conquer the problem without concerns of overheating or getting beat up by recoil and muzzle blast. Introducing new shooters (especially kids) to long range shooting is just so much easier with the small gun it is not even funny.  The .22 is not a complete replacement for big gun practice but it can be a huge supplement to your long range training program. Get one, get some targets and enjoy it.